ADVICE TO PROPERLY WINTERIZE YOUR VEHICLE AND REDUCE RISK AND LIABILITY
It’s that time of year again when we should start thinking about winterizing our vehicles.  Attorney Douglas V. Stoehr would like to offer a few tips that will help with this process.


Now that you have properly winterized your vehicle we would like to offer some advice to prevent an accident from occurring.   You should always decrease your speed and leave at least three times more space than usual between you and the car in front of you.  Remember to brake gently to avoid skidding, and to use low gears to keep traction on hills.  Remember to keep your lights and windshield clean to increase visibility.  Be particularly careful on bridges and overpasses, which will freeze first.  You should never pass snow plows because it’s likely that the road in front of the trucks is much worse than the road behind them.  Of course, the best tip is, if you don’t have to travel in winter weather…DON’T!

Some preventative maintenance and exercising a little caution can go a long way in preventing an accident from occurring in the first place, and protecting you from liability.  However, if you are injured in a vehicle accident this winter please allow either Attorney Douglas V. Stoehr or Attorney Aaron M. Ling to review your claim 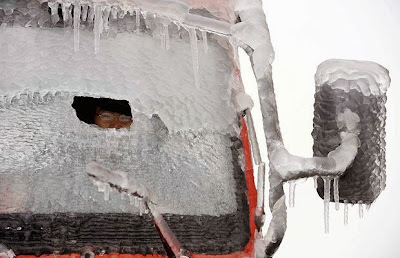 DANGEROUS TIME OF YEAR FOR DRIVERS AND DEER

State Farm has released its annual deer-related collision report, and Pennsylvania is again listed as the fifth most likely state for a deer collision.  Pennsylvania drivers have a 1 in 77 chance of hitting a deer this year.  Even though the odds seem good, State Farm has reported that the odds of colliding with a deer are actually down by 4.3 percent.  The reason for the decline is simple.  There are more registered drivers on the road.
State Farm compiled these numbers by look at the total number of deer collisions between July 1, 2012 and June 30, 2013, and found that 1.22 million deer-related collisions occurred during that period, which they say is down by 3.5 percent compared to the previous year.  State Farm also reports that November is the most likely month for an incident to occur, followed by October and December.
State Farm has reported that the “Top 5 Most Likely States for Deer Collisions” are as follows:  1) West Virginia; 2) Montana; 3) Iowa; 4) South Dakota; and 5) Pennsylvania.   State Farm has also provided tips for deer safety:
1.       Be aware of posted deer crossing signs, which are placed in active deer crossing areas.
2.       Deer are most active from 6-9 p.m.
3.       Use high beams headlamps as much as possible to watch for deer at night.
4.       Do not be a distracted driver.  Using cell phones and eating while driving may cause a driver to miss seeing a deer until it is too late.
5.       Deer typically travel in groups, so if you see one it’s likely there are more